Embrace: The Good, The Bad and The Ugly!

I have said it before but I will say it again, I am really looking forward to this payday, because it will mean that my paydown will be back on track. For me, this means that a mistake has been corrected.

My paydown process was interrupted in the beginning of June by the failure of the guy who hit me to pay me what he owed me. (I have still not heard a word from him and don’t expect to). I was left with the bill, and that threw me for a loop, skewing my financial plans. Sure, I will admit that I put one or two other items on this card. In the end, all of it was my choice to do, I blame nobody else.

Yet without that eventuality, I could have been paying off the last of Card #3 by now, but that is life. What are a few more months in the grand scheme of things? Yet still it is this last point which nags at me. I wonder, what could have been if I had made different choices?

As I see myself digging myself out of this hole that I have dug myself into, I wonder why I didn’t do this earlier, years earlier. I also know that I was not ready to make such a leap of faith. I am the person that I am because of the choices that I made; both good and bad.

I have learned from what I have done and what has happened to me. If I were to go back and take a different path, then I would end up being a different person. Simply put, you are the result of your choices, so embrace them, all of them: the good ones, the bad ones and yes, even the ugly ones.

Your good choices only teach you what works. This is something handy to know but it doesn’t teach you much more than that, you won’t really know why something works, only that it does.

Your ugly choices are the ones where things really went wrong, as in an epic fail of spectacular proportions. These ones are massive and huge and require reflection on the scale of a commission of inquiry, or an autopsy of the mistake.

These lessons can help teach you or shed some light on an aspect of your character which may have contributed to this ugly choice and epic fail. These ones are the most valuable ones, as they teach us the most.

Now, to brighten your day, here is your sunrise shot. 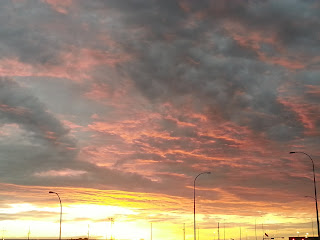