I did move to another block, not far from a place I used to park. In the middle of this industrial area is a wetland, which is in essence where the storm drains of the whole area lets out. There are duck, bullrushes and other vegetation and wildlife. 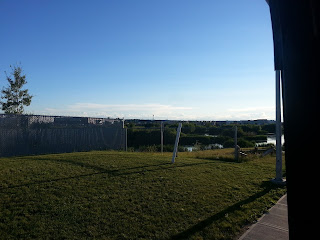 All in all, not a bad view.

I don't want to freak anyone out who is coming and going by parking right across from active offices. Where I an parking now there is an equipment lot and the side of a building on the other.

As far as my literary troubles with Book Two is concerned I realized that the problem was the fact that there was the beginnings of another novel in the middle if this one.

So Literary Mitosis occurred again. I have begun another version of Book Two and take out those remnants of another book. So I have the kernel of Book Three already.

I will ignore and put behind me the nasty message and teenage antics that was done to me and move on. I will continue to do my walk around before going anywhere from now on. It is always a good idea, anyways.
Posted by Geoff W at 08:08