There he was, parked three stalls away, just sitting there. To the untrained eye it just looked like a guy sitting in his car, but I could tell; I knew what to look for. The pillow, the quilt nearby, the changing of the shirt while sitting in the driver’s seat, and yes being there so early in the morning after being there late the previous night. All this added up to one thing: he was living in his car.

I don’t know if it is just that, as a result of my situation, I have become more attune to it, or if it is just more prevalent. I do notice more people living in their: RV’s, vans and yes cars. He was not the first and I know not the last that I will see.

I was tempted to go over there and offer him a cup of coffee, but I admit I didn’t. I kept thinking, wondering really (and perhaps this was a weakness on my part) where would this charity end? If he was living in his car, even temporarily, then he would need more assistance than I could provide. Yet just a friendly cup of coffee and perhaps some pancakes would probably have brightened his day.

I didn’t keep an eye on him or watched him if that is what you are thinking, but as I would come and go he seemed to spend most of his time just sitting there. He would come and go occasionally but otherwise he would just sit there, unmoving; odd really.

As for me, I decided to make another small batch of my taco stuff, as the batch of frozen lasagna stuff didn’t turn out quite right. It didn’t spoil or anything and when ate, seemed to be okay when tomato sauce was added.

The problem with it was that when it was defrosted it would hold the shape of the bag (I defrost stuff with the bag removed when frozen). Stranger still was that all of the water would drain out leaving the mass of stuff with the feel and consistency of a sponge; quite unnerving.

I found myself avoiding eating this as I wondered if all of the goodness had been drained away in the water. The main reason that I ditched this was the fact that I wasn’t eating it. There is no reason to keep my freezer full of something I will eat as a last resort. I will end up eating other things, and so this is not cost effective.

The key to the success of the taco stuff is to keep it simple. Take whatever amount of beef you have and add the equivalent in hash browns and/or mixed vegetables, and then add the appropriate amount of taco seasoning packets (and yes water).

So if you have two pounds of beef and add two pounds of vegies, then use four packets and four cups of water. While you will notice the peas and carrots in the taco meat, the hash browns mixes in seamlessly and stretches your meat. I will limp along until payday and make another batch of this stuff, and not get crazy with it; that is the key, don’t go fancy.

Version three is coming along well and I am making progress heading down this path. I feel that I am on track for a good book. I am taking this one chapter at a time and working it through, I know that it will pick up speed as we hurtle down this path, before long book two will be done and then on to book three.

As with everything: Dream far ahead, Plan a short ways ahead, yet Focus on today.

For no reason at all, here are your sunrise shots. 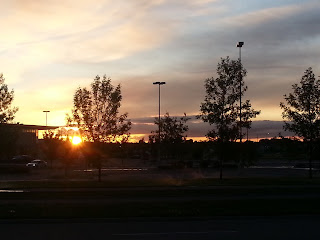 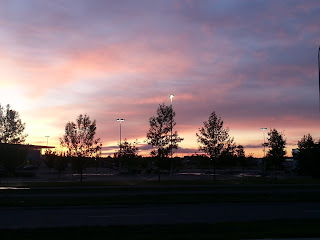