On the weekend, Sunday specifically, I made another batch of stuff to freeze, so I could cook up small amounts of it over the next while. It started out so well, it looked and smelled good. It was an enlarged and exaggerated version of beef noodle. 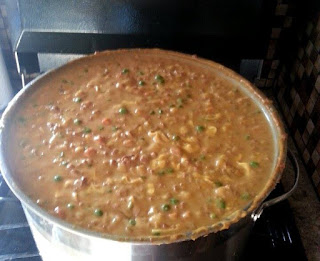 I cooked it up as I always did and let it simmer, bubbling for hours on low heat, to make sure that I didn’t burn the bottom and it worked. The next trick is for me to leave it in the fridge for a day, so that it cools down and has time for the flavours to blend.

That was where things went wrong. I did not alter my usual routine of turning the fridge off during the day at work yesterday. It was an unusually hot day yesterday and so the fridge was not kept cool enough by my blue ice pack. So what happened was that dumb-dumb me just spoiled what was about ten pounds and two months of food.

While I did not blow my entire food budget on this batch, it was a sizable chunk of it. I still have other food and a modest amount of my food budget in reserve. I will just eat what I have and feed myself as cheaply as I can until payday comes around on the 22nd.  I will just pretend that I am back in college.

As for me, I think I will stick to smaller batches and go from there. That and to spend the propane and leave the bloody fridge on during one of the hottest bloody days of the year . . . ah well, we live and learn.

I have started to edit Tanea book one again, so as to get me back in the spirit of things as well as tweak a few minor things here and there in the story. Again, it will be fun and relaxing for me, and hopefully help me get moving on Book Two.
Posted by Geoff W at 08:14