“WHAT?” she shouted in stunned disbelief.

Life in the little shack stood still as three sets of eyes trained on me in: shock, horror, and disdain. I tried my best not to smirk, for a moment, before I chuckled, then laughed. The groaned, grumbled and shot a few sarcastic remarks back before returning to their knitting.

You see this was as I was checking into the campground in Banff, as in the National Park of Banff, and the Park Ranger lady was giving me the usual spiel. When she got to the part where she said, “Be careful, we have bears in the area,” I (being the sarcastic smart-mouth that I am) replied “That’s okay, I brought my gun;” thus the shock. As you can imagine Park Rangers tend to frown on you having a gun in a National Park and look even dimmer on you actually shooting any of the wildlife (Gophers included).

I did get to Banff and got settled in on Friday with little trouble. Here was my campsite, my home for the weekend. 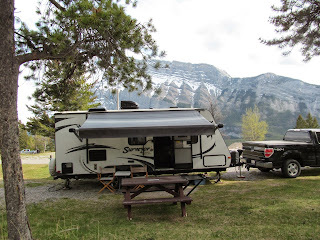 The first thing I did was to fill up my fresh water tank and then connected up the hose to the main water in. I made sure that water flowed through the lines and then turned the main tap off (at the campsite connection). That was when I tuned on the water pump and turned on the bathroom tap. It started as a sputter but it did work. My water pump was fine, I danced. This meant that I would have running water after I left the campground, and not have to have it replaced again.

That night I plopped and did nothing. I sat, relaxed, went for a walk or two, but that was about it. Saturday I also plopped and did very little. It was my official plop day. When I do get out of town, the first day is where I just plop and do nothing.

My excuse for doing nothing was that it was raining . . . spittling really. For a guy from Vancouver this rain was nothing. A nice spot was that while it did lightly rain off and on, Friday, Saturday and Sunday, it didn’t snow.I did get to see some wildlife, though on my walks. 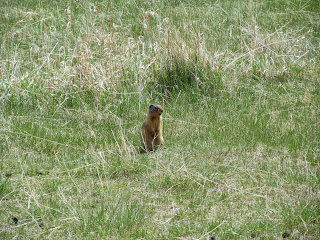 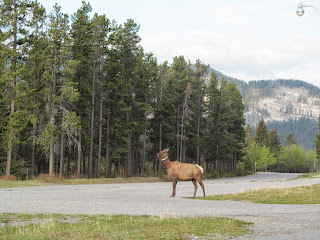 On Sunday I did go for a hike in the woods around the campground. 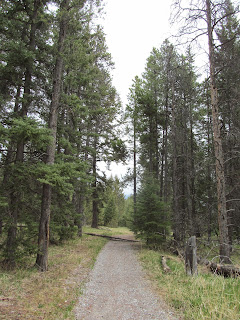 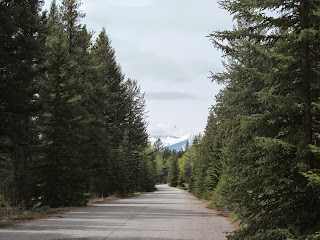 I got around to some minor repairs, cleaning and organizing that I had been meaning to do, but never got around to. On Monday evening was when I topped up with water, as in as much as I could. I filled up the main water tank until it was dribbling out the filler spout.

I filled up the large water bottle that I buy water in and my five gallon jug. I then scavenged all of my bottles that I had soda bottles or those previously containing “other consumable liquids.” I filled them too. How? With my fountain and hose setup which is essentially a funnel shoved into the end of a hose. 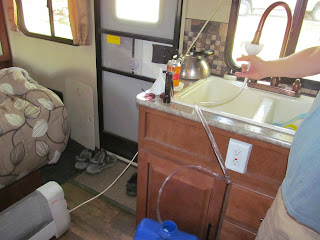 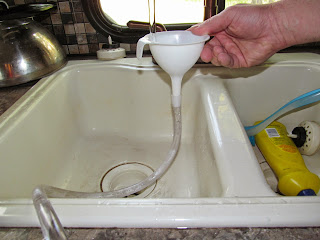 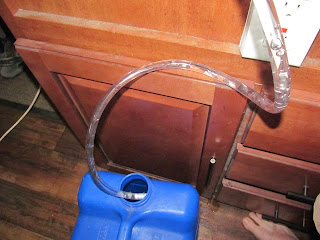 Here is my water jugs that I ended up with. 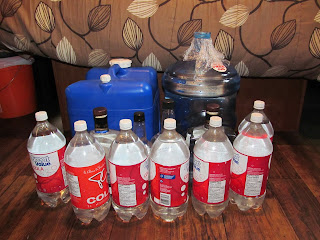 You may be wondering how I will get this water into the fresh water tank? Well with the smaller bottles I can just pour the water right into the spout. With the larger ones I can’t do that, so I came up with this solution. I bought a hose adaptor and small hose for my 5 gallon jug. 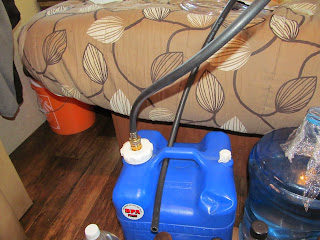 This way I can put the hose down the spout and lift the jug, thus emptying it. I can then transfer the water from the large blue jug (that I buy water in) into the blue jug and repeat this process.

Monday evening was when I got the perfect shot of the mountains, so here is the best of the lot. 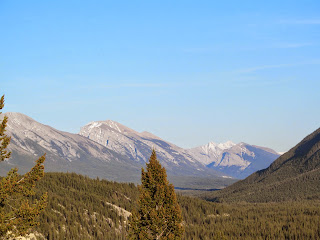 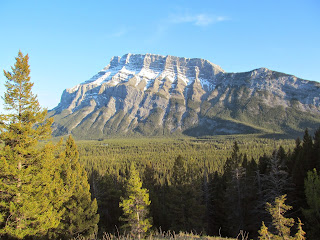 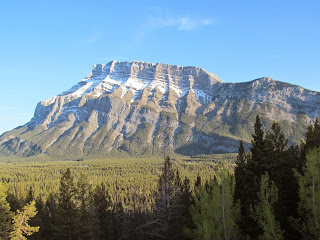 Since my trick is to leave the morning of when I have to work and drive straight to work, I pack up camp the night before. This way at Four in the morning people don’t hear me cranking jacks up or motors whirring. Since there was a frost advisory, I made sure to pack up the water and sewer the night before as well. The electrical cord I left plugged in until the morning.

It was a good weekend and I got a lot done, and rested up but I didn’t get down to the town of Banff nor did I go up the gondola. I just didn’t feel like it or spending money. Oddly enough I wanted a weekend to putter around the house and get some stuff done, stuff I have been putting off for a while. I feel most relaxed and at home on a campground. This is because I have paid to be here and am ‘supposed’ to be here. This fall, once the finances are stabilized I will look for a camping spot to winter over in (as long as it is not stupidly expensive).