It is Election Day here in Alberta and so I thought I would take a brief moment to encourage all people who are eligible to vote in any election to vote in every election they can. Not only that but put some thought behind your vote and don’t give in to scare tactics or nifty marketing of political parties.

Sure I have identification which proves that I am a Canadian Citizen and my driver’s licence does have my (mailing) address on it. The sticky wicket is that I don’t have that all-important “fixed address.”

I understand that they need it in order to determine what riding I fit into; so, on one hand I get it. This is, however, another example of how our society is ‘Cubby-Hole Centric;” you are nothing if you don’t have a cubby-hole.

I really don’t want to give a false address or my work’s address in order to vote. I may give an address nearby where I usually park, but again, that would be lying and I don’t want to do that. I may simply refuse to do so and in so doing be barred from voting, just to make some sort of stance or be honest to myself.

I do firmly believe that it is every person’s civic duty to vote and participate in the democratic process, no matter how woefully broken it is (don’t get me started). So in saying that, I really do want to vote and in this key election in particular.

I will let you all know how my attempt at voting went tomorrow, but for now, enjoy this unique sunrise. 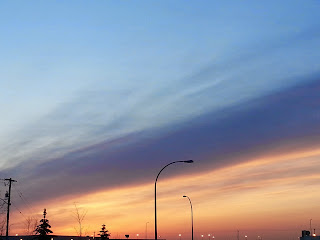