I usually get a chance to budget first what I will do with my paycheque before I have to head to the bank. You see, I usually get the check either the night before or it is waiting on my desk for me on the morning of payday.

This way, either the night before or that morning of payday I can at least spend a bit of time doing a bit of budgeting. Yesterday I got it half way through the day.

So, I just looked at my wallets and did the basic budgeting, as in what cash I was going to put in each wallet (Groceries, Utilities, Spends). I filled up Trea’s tank and then went to my western home to figure out what I was going to do with the rest of the cash.

The nice thing was the fact that I was able to put aside just about a double debt payment. I set aside almost twice as much as I usually set aside for credit card Debt. One chunk went on Card #3 and the other chuck went on Card #1.

This means that things are still on track for my Nov 22 deadline for credit card Debt elimination. That bite that I took out of Card #1 took almost half of it away, so a few more paydays like this one and I will have it done before the Nov 22.

Now that I am so close to finally finishing this first Chapter of my journey, you would think that all I wold see is the end and the happy journey after that. The trouble is that sometimes, I still feel that I have accomplished nothing of worth, despite my forty-five years of existence.

I still get bothered by the bumps in the road and the uncomfortablliltiy of the journey. I sometimes second guess why I did this and if it was necessary to do so drastic a measure.

It is during those times that I pause and reflect on where I have come and where I was two years ago . . . five years ago . . . ten years ago. Often times I lament not starting this journey years sooner, as I know that I am on the right track.

This next picture is one of those which showed up in my Facebook feed, (original source/artist unknown). For me it explains perfectly one of what I would term as one of the key skills to success on any hard journey, such as mine. 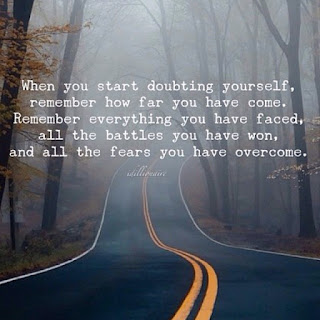 I do consider a nice cabin somewhere, on a bit of land where I can live simply and cheaply as I write. I have a lot of ideas, a lot of things that I would like to do. I know that I must not jump at anything, unless it is a cheap piece of land on which to park Wanda. Still live cheaply but without a mortgage.
Posted by Geoff W at 08:03