The Not Doing So Well Neighbours

It is funny how we humans are creatures of habit. We like to set our lives in patterns and desire consistency. So too is the case when it comes to where we bed down for the night.

This last spot is in my Western Home, and I like it because I can put my slide-out out, my stabilizer jacks down and in the evenings even put my awning out to block the evening sun. Ah yes it is a nice little spot, not too noisy and yes very continent for shopping.

There are two others who have a similar idea to mine as they park in this end of the parking lot, both in exactly the same spots. They are not sleeping in RV’s, however, but in vehicles; one is an old SUV and the other is a not so old car.

I do notice these things as there are telltale signs if someone is living in a vehicle. They come and go and tend to spend hours in their cars and return to the same spots. The fella in the SUV puts some storage boxes on his roof or behind his SUV at night. No doubt to make room to sleep in the back seat.

The guy in the car is not so lucky as it is a car but not a large old boat that has a backseat that goes on for miles. I actually had a chance to talk to him this past weekend. His life, like so many in this province, has recently taken a decidedly downturn in recent months.

He was working but was laid off. When he went to claim EI, however, he didn’t qualify because the company simply denied that he ever worked there, despite having worked there for the last year and a half.

Now he is locked in a legal battle with them and still out of work. So living in an older car is what is left for him. I don’t know what he did, as I didn’t ask, but it must have been good as he did lament the loss of his Prius.

The other gent I didn’t talk to at all but he seems to be working in one of the trades (I think). Both of these guys seem to be survivors and are not looking for handouts, just dealing with what life has tossed them and doing what they can to make their lot in life better.

A happy note is that last week I caught a glimpse of another fellow I had met out here. This was the guy who moved here from Montreal and was living under a bridge, then in an old truck, and finally in a string of old RV’s. He seemed to buy them, then sell them after a bit. He even got a job at a moving company whose offices are not far from where I park at night during the week.

The happy note is that I saw him driving a new small car with a lady (not looking terrified) in it as he drove away from work; he waved and so did I. It seems that he has finally got his life back on track and into some sense of normalcy. That is good to see; as there is hope for all of us, my not doing so well neighbours and me.

For no reason, here is a sunrise shot from the weekend. 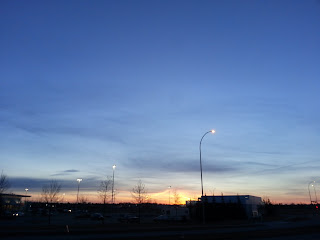