To be clear I went to bed alone (as in with nobody else in my bed), so it is no surprise that I woke up alone. (The real surprise would be going to bed alone and waking up not . . . but I digress.)

So what do I mean when I say that I woke up alone? Well, since yesterday was payday (delayed a day due to the bank holiday). I ended up sleeping in my western home, as is typical after running around on payday.

You see, when I went to bed I saw the usual RV’s and motorhomes still parked in their usual spots, a few with generators humming. The only notable exception was that the big rig pulling the older fifth-wheel was now gone. The motorhome that was being renovated was still there.

When I woke up I was the only RV or motorhome in the parking lot. One lone truck and camper was in a distant corner of the parking lot, but that was it. This is in startling contrast to the refugee camp that this parking lot became over the Calgary Stampede.

It was an odd feeling to be sure and I wondered if I had somehow missed a notice not to park here anymore. I even glanced around to see if there was a fleet of tow-trucks or police coming to ticket and tow me. Yes, I even glanced at Trea to see if there was a boot in place, not allowing me to move until I had paid the extortion fee to the city. Happily, there was none of those things, so I just carried on with my morning.

On a happier note, last night I did get my running around done and even some last minute shopping needed for my trip, as in a few extra groceries (and beer). Now just to get through today, tomorrow and then the longest Friday ever!!! (The last one before my vacation.)

As far as writing goes, I did continue this chapter that I had been working on, and I got over the hump of it. This chapter is important because it is a new chapter at the end of all of the other chapters. I am not filling in space between other chapters, but entering into new and uncharted territory.

The hump of a chapter, by the way, is what I call the point where you have a clear indication on where that chapter is going and just what needs to be said and done.  All you have to do is just need to write it down. This one, once again, increased tension and division so, things are heating up. As an added bit of fun, I made another character freak out and lose it . . . woo hoo.

This chapter is chapter fifteen and I estimate that I will have twenty-five chapters in this book too and keep it to around, if slightly over 100,000 words. So I am closing in on getting this book done, who knows it may be done before the end of the year, we shall see. It will take as long as it takes.

For no reason whatsoever, here is your sunrise shot. 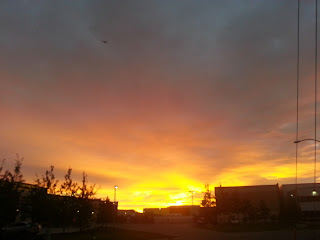