It was an unusually hospitable weekend for me. I had a few people talk to me about my trailer and asked questions about it and where I got it. I naturally answered all of their questions and let them take a look inside Wanda.

I also had a visit from the guy I met a few weeks ago who had moved out from Quebec. He had sold his trailer and was banking the cash.

He said that he would buy a nicer, newer trailer (something from this century) after he gets back from a cross country work trip. He is driving a moving truck to Toronto and back. It was good to talk to him and see that he is doing well.

I did get my new phone batteries and wall charger in the mail. I was able to charge the batteries up while running Wanda. This is what it looks like. 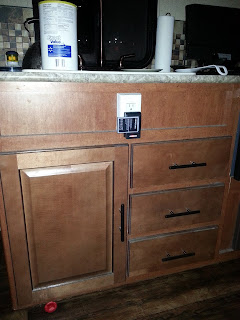 When it is charging the light is red, when it is done the light is blue. This should work out well. I now have three batteries for my phone. Well, two and a half. I have two new ones and the original one with the phone.

The two new ones I labeled “Battery 1” and “Battery 2” the original battery has been downgraded to “Battery 3” and will be used in case of last resort.

I now plan to use the wall charger and only the wall charger to charge the batteries. I will run the battery down in the phone until it is almost dead, and sometimes let it die completely and then just pop in the new and fully charged battery.

I should have done this years ago and this is the one advantage that a phone with a removable battery has over one with a built in battery (such as an iPhone).  Though Apple’s products do seem to charge quickly and have a long battery life, so they have that going for them.

I have a bit of a confession. My plan to sit down weekly and do my bookkeeping hasn’t quite worked out as planned, let me show you. 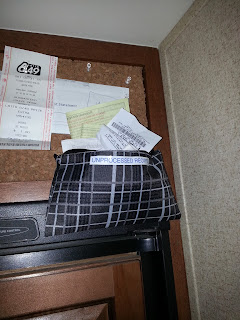 I will now wait a few days . . . who am I kidding, this weekend and bring things up to date. I will try to guilt myself into doing this on say Wednesday night. That way all of last month’s account activities should be downloadable. Then I can close October off all at once.

I will admit that bookkeeping is a challenge for me, or rather forcing myself to sit down and do it. Ah well, it will get done and it will not take me nine months to get it done this time.

I was not the only one who was not doing their job this weekend. My laptop, specifically my laptop’s batteries broke a new record for patheticness. It lasted from fully charged to “You must shutdown now!” for only one half hour.

It is now officially a “run only when plugged in” laptop. It still runs, so I will keep it going. I must keep on track and buying a new laptop right now is not in the plan. This one works, it is okay for now. This seems to be a reoccurring theme in my life, however, I am getting ahead.
Posted by Geoff W at 07:46