Winterized Wanda . . . In My Signature Way.

So, first I want to say that when it comes to winterizing . . . or just about anything that you read me doing on this blog, do your own research and/or consult a professional.

This blog is and will always be a story about my journey, about what I have done, what I am feeling and what happened as a result of my actions (or inactions) so that others can learn from my experiences.

So, with that ominous warning, let’s begin the tale as to what happened when I tried to winterize the trailer myself.

I went to a full-hook-up campground in order to do this. The reason was that I needed the drain and fresh water that comes with it . . . mainly the RV dump station.

So, first of all I bought two jugs of “Water System Antifreeze” each jug was around 10 Litres, and I wanted to be sure that I had enough. 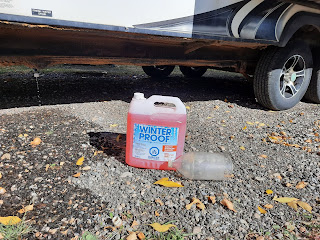 So, the first step was to drain both of my tanks, as in my Black and Grey Water Tanks.

Then as I always do when I am at a Full Hook-Up Campsite I flushed out my Black Water tank.

I did this by putting my special washing hose down the toilet and into the black water tank. It spins around and kinda pressure washes the inside of the tank.

With that done the first step was to drain the fresh water tank. There is a small hose that sticks out of the bottom of the RV and is marked to do this.

You simply unscrew the cap and water comes running out. 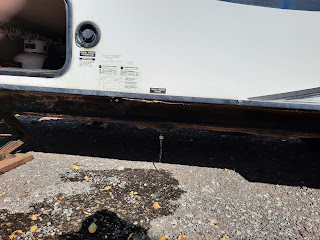 To be safe, I drained the water lines, too. There is a separate pair of hoses sticking out from under the trailer that allows you to do this.

To help this I opened up the faucets in the trailer so as to let air into the line so as to let the water in the lines out. 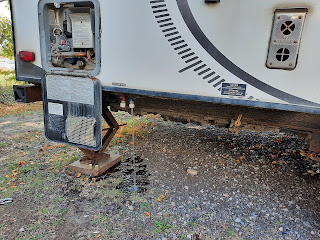 Here are the valves in the Un-Isolated position. As in when the hot water tank is in use and part of the water system. 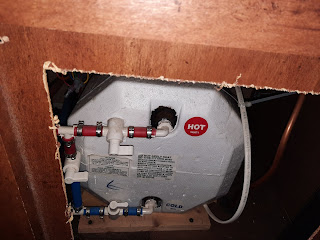 Here is are those same valves in the Isolated position, as in the hot water tank is not part of the water system. 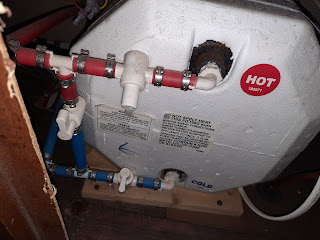 It is a rod that sticks into the tank so that it will be corroded and not the tank itself. It is to be replaced when it gets too corroded.

I forgot to get a shot of it removed, but here it is.

Next (once all of the water has drained from the lines and water tank you put the caps back onto those little hoses sticking out of the bottom of the trailer.

After that you pour the antifreeze into the fresh water tank. This is where it gets interesting, finding (or making) a funnel arrangement to make it work.

This is what Kim and I came up with. 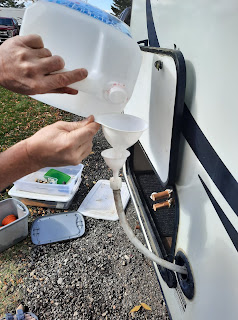 What is supposed to happen is that you turn your water pump on and run the taps (both hot and cold) until you see pink stuff flowing out of the tap.

You do that for each faucet in the trailer, both hot and cold and you are done . . . yay.

For us, for Wanda, after the tank was dry and the antifreeze was in the tank, all that would come out of it was air.

Fortunately, Kim knew a guy who was a Mr. Fixit of all thing who offered to help if we brought Wanda to him.

We did, the one thing I learned was where my Water Pump actually was . . . inside the pass through storage in the front, under the bed. . . on the passenger side. 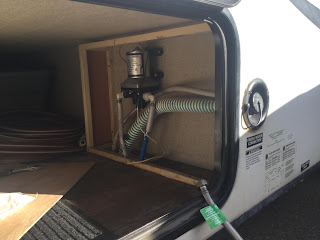 This process took us all afternoon, as I didn’t start do winterize Wanda until just after one in the afternoon.

I was frustrated and frazzled as nothing we did would make anything come out of the fresh water tank (we confirmed that there was something in there by trying to drain it).

We also confirmed that my pump was working as we had it pumping some water (I think) and we also couldn’t get another pump to draw anything out of it.

The one thing we did do was (inadvertently) connect the outside “tester” water pump to my water lines and try to draw water out of them.

The pump was bone dry, so nothing could get further damaged over winter.

Our best guess was that somehow, by fluke the hose/pipe going down into the tank must have dislodged and disconnected, thus why the pump was drawing no water when it was working fine all morning.

That would mean a lot of disconnecting and taking things apart . . . something I didn’t want to start at 5pm on a weekend when I still live in Wanda.

(I’ve seen this movie before, it rarely ends well, and I am afraid to tempt fate in 2020)

So, Wanda is winterized, though not how I had planned. Again, in my signature style “not fancy, but effective).

As always: Keep your head up, your attitude positive, and keep moving forward!