The Day The Computer Died

So, this past Saturday, as Kim was working away cooking her shredded cabbage rolls batch, I was working on the computer I bought a few years ago. 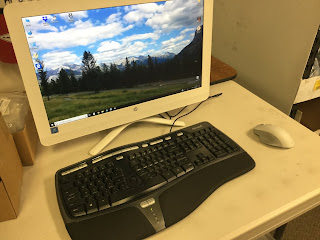 I brought it over about a month ago deciding it would do more good at Kim’s place than in a box in Wanda.

And then the trouble started. What happened was that at random intervals (with a long gap between, so it didn’t happen all that often) the computer would freeze then restart.

I tried any number of things to no avail, we even tried to do a system restore but that didn’t work.

Finally I did a fresh and clean install of Windows 10, got it setup and . . . it did again.

It confirms (to me) what I had feared all along, that it is a hardware issue.

Now, with typical computers you could open up things and replace components. One of the disadvantages of an All-In-One computer is that everything is on one board.

It is still put aside because it may, or the components thereof, may be used for an interesting project along the way.

But for now we are left with Kim using her laptop and part of the reason I wanted this computer setup at her place was so she could have a larger screen.

Thus, I improvised (after she asked to keep the ergonomic keyboard of the All-In-One) 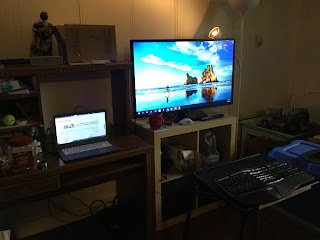 That is us using the HDMI output from Kim’s laptop to use her TV as a massive monitor as she uses the Keyboard all setup on a impromptu table in front of the computer.

While it worked in theory, Kim says she probably won’t do this that often, as it is a bit of a fuss to do this. I just wanted to try to see if it would work, and it did.

So, the All-In-One that I got very little use out of is officially dead.

As always: Keep your head up, your attitude positive and keep moving forward