The Archives Have a New Home

So, as you may know, I have been collecting books in what I term “The When You Need To Know It, But Can’t Google It,” archives.

What I have been doing is storing the books in various plastic storage tubs in and around Wanda and the back of my truck.

While it was secure and safe from damage, it was also inaccessible and so, a little harder to see what subjects were covered and what was not.

So, after some talking and discussing, Kim and I agreed that the best place for The Archives to be was up in her place.

So, after having a yard sale on Saturday (there was a community wide “Parade of Garage Sales” thing on that day) where it went surprisingly well.

Anyways, after the garage sale we found ourselves at IKEA, where I ended up buying two bookcases.

We waited until Sunday to actually assemble them and as a result of how that went, I have come to the conclusion that we are doomed as a couple.

There really isn’t any hope for us, as we assembled it and everything went well, there were no arguments and any disagreements on what to do next was handled civilly and respectfully.

It looks like neither of us are getting out of this relationship anytime soon . . . we’re doomed to spend years together.

Anyways after the bookcase were up and the living room was rearranged (something else that went smoothly) we started putting the book on the shelves.

Me, being the detail person that I am, wanted to cross off a list as to what books were up there and what weren’t. I wanted to make sure that the whole of The Archives were together in one place.

As a result of that bit of what may have seemed unnecessary work, it was revealed that just over twenty books were missing.

After some investigation back at the trailer, one small tub of books was found to contain, what appears to be, those missing books.

So, finally The Archives are accessible, as they should be, with plenty of space around them, so as to continually add to The Archives. 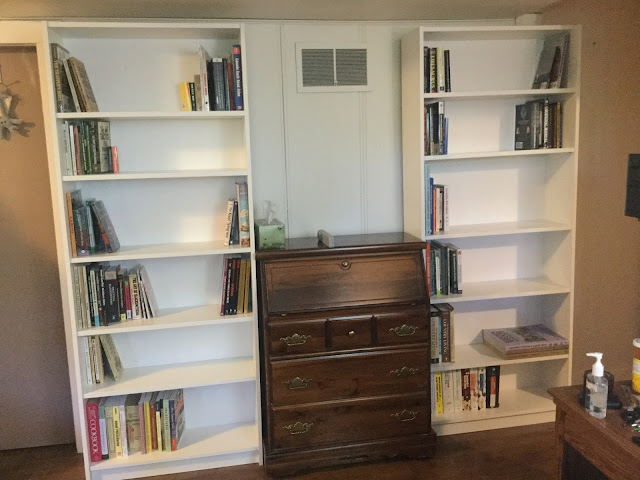 As always: Keep your head up, your attitude positive and keep moving forward!