Yesterday Was a Snow Day

If this happened while I was around the trailer I could be up there brushing the snow off every half an hour to forty-five minutes.

Since I was at work I could do no such thing . . . all I could do was watch the snow pile up.

Even going back at lunch to brush the snow off wouldn’t help (much) because at best I would get forty-five minutes of energy generation.

So, I waited until after work to see how things were. This was what I found on the roof of my trailer. 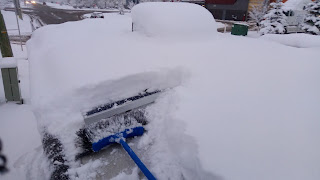 I brushed the snow off the roof and was pleased to find that the batteries were still at around 70% when I got home. I was still very conservative with my power usage that night.

This was because I don’t want to drain the batteries too low, and come morning they were still around 70%.

I brushed the snow off of the roof again this morning before heading to work, confident in the fact that I should have a full charge in the batteries within two to three hours of daylight.

As always: Keep your head up, your attitude positive, and keep moving forward!
Posted by The Urban Nomads at 07:46