Okay, so my plan was to let Mother Nature, AKA the weather blow most of the snow off of my solar panels . . . that didn’t happen . . . as in there was no wind yesterday.

So, this was what they looked like when I got home last night . . . 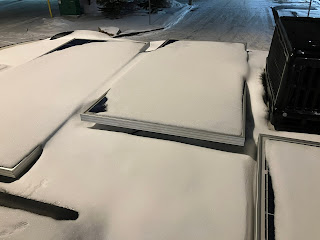 This brings up another point, one that will reveal itself once I brush the snow off of those panels . . . there we go. 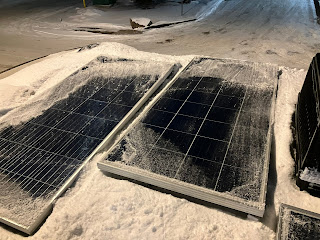 You see that there are bits of ice still stuck onto the panels, now that is not a huge problem but it will decrease my ability to generate power from them.

Which in this time of year could be vital but in a sunny day, even in winter, that ice should melt away.

The black colour of the panels do help in that regard, in generating a bit of heat from the sun. That is what happened and caused the ice to form in the first place.

The panels melted the snow a bit and then that water or wet snow then froze overnight and it became ice under the snow.

Besides, at this time of year, during the week, I don’t use that much power, as I can’t and won’t run my laptop in the trailer in this weather.

But I did run the furnace a bit last night as it was around zero when I got home. This was nice as I was able to get a bit of the frost that had built up inside melted away.

Again, this time of year is about getting through it and doing what I can with what electricity that I can glean from the sun.

So, yeah I should have actually gone up there and brushed off my panels yesterday morning . . . ah well.