So, It Happened Just As I Thought That It Would.

I had resisted getting one of these for fear that this would happen . . . 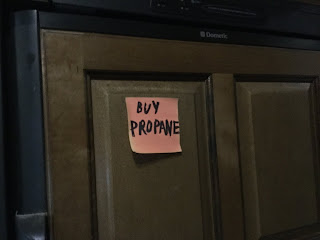 You see, I have two propane tanks on the front of Wanda.

When I first got Wanda, there was a device that switched from one tank to the other, but it was manual.

That meant that I had to go out there and flip a switch for it to switch from drawing propane from one tank to the other.

This allowed me the chance to fill up the now drained propane tank at my leisure. All I had to do was make sure that that tank was full before the other one was empty.

With this switching back and forth I was never out of propane. It was a simple system but it worked.

Back when I got Wanda fixed they replaced that manual switchover device with an automatic one. Apparently they don’t sell the manual ones anymore.

I had hoped that I would see some sort of warning when this thing switches from one propane bottle to the other, nope, I didn’t.

This morning, I awoke, went through my routine, and found that I was totally out of propane . . . in both tanks.

I had feared that this would happen, but I will just go get my tanks filled up this afternoon and roll with it.

I still have my ten pound bottle of propane that I use for my BBQ, so if (and when) this happens in winter I can have a bit of propane to use.

I didn’t bother this morning, I just left and ate breakfast out.

There are propane measuring devices but the inline ones won’t work for me because the propane hoses were too short to allow the extra space needed for them to work.

There are some sonar type devices that work by attaching them to the bottom of the tank, and send a signal to your phone, but I don’t think I’ll go that far . . . yet.

Ah well, I will, as always, take this in stride and just keep moving forward.

As always: Keep your head up, your attitude positive, and keep moving forward!
Posted by The Urban Nomads at 07:32