Okay, it was a productive weekend where I not only cooked another batch of food for three months (will blog about that tomorrow) but I also reworked my paydown plan, and in the process moved up my Total Debt Freedom Day.

It all started with me putting up that countdown board that would let me count the weeks and months until my Total Debt Freedom Day of January 16, 2018.

Why that day? Well, my last automatic payment on the truck will go through on midnight of the night before, so I will wake up totally debt free. 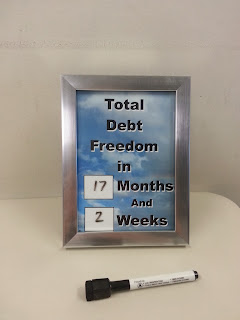 This weekend I decided to check the actual date of the last payment on the truck loan. Well, I got a shock, it wasn’t until January 15, 2019, two years away.

This pushed my Total Debt Freedom Day to January 16, 2019. I figured that I would still carry on with the plan and just save up what I could after the trailer was paid off. 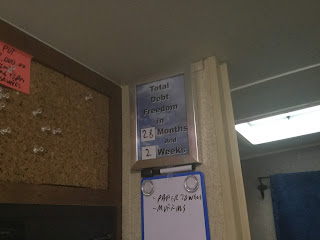 This got me thinking and then calling the bank to explore the possibility of paying off the truck first. I realized that I could pay off the truck by the end of October then spend one month to pay off the visa.

After that and then split my savings equally between building up my Mid-Term savings account and saving up to pay off Wanda. This put my debt freedom day to April 22, 2018. 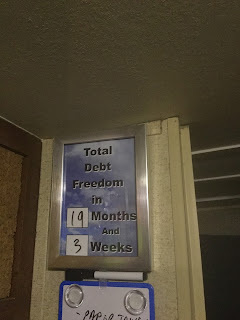 I then wondered what if I was to throw caution to the wind and after paying the truck and visa off that I focussed on saving up to pay the trailer off. This then moved that paydown day up to October 22, 2016. 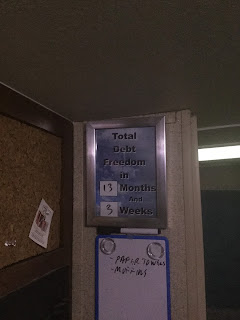 Not to get caught again I phoned the back that the trailer loan is with and had them tell me approximately how much of each payment went to the principle and how much was interest.

With this it was just a spreadsheet later that I was better able to estimate when I would have enough saved up to pay that loan off, this pushed the date that I would be able to pay the trailer off back one payday.

Thus I can now officially say that my Total Debt Freedom Day is now November, 7, 2017! Just over a year from now in fact it is. 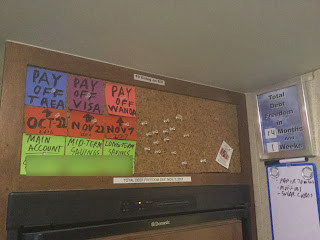 Yes, in less than 14 Months and one week I will be totally debt free!

As always: Keep your head up, your attitude positive and keep moving forward!
Posted by Geoff W at 08:59