A little trick that I have been doing to save cash for a few years is to make a large batch of food and freeze it in meal-sized portions.

This way I know that I am going to have a good hot lunch at work yet it doesn’t cost me that much.

This batch turned out to be the most expensive yet but it also was the tastiest. It came out to be 53 meals at $2.00 a piece.

My last few batches came out at about $1.25 a meal but what the heck, I will be more careful next time. Here is the food that went into this batch. 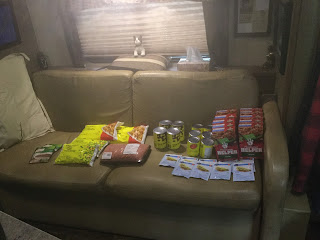 The major difference was the fact that I did my double-boiler idea for my stock pot. Finding a pot large enough was a challenge but I found a canning pot.

My idea was to boil water in a large pot and put my stock pot in it, therefore it would get indirect heat so as to not burn the bottom inch of food in the stock pot.

This means that I needed something to support the weight of the food-laden stock pot so only water and not to bottom of the larger pot contacts the bottom of the stock pot.

To do this I used the metal frame that came with the canning pot intended to let you get your mason jars in and out of the pot. I turned it upside down and used angle braces turned on their side to add support. 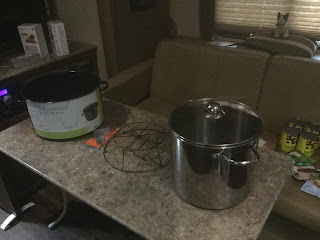 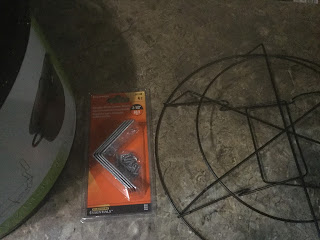 When it is all together it looks like this. 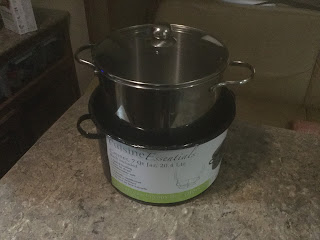 What I do to make this batch is to first of all take the mixed vegetables and simmer them in enough water to cover them and toss in the onion soup.

While that is happening I brown the ground beef a chunk (whatever will fit in the frying pan) at a time, letting the grease drain into for a moment afterwards before putting it in the stock pot.

Once the beef is in there I toss in the hash browns as in the whole bag. I treat this as meat substitute.

I then dry mix the taco seasoning (for flavour and kick) in one packet at a time. This way the dry powder sticks to the moist beef and hash browns thus ensuring even flavour distribution.

Then I toss in the (simmering all this time) veggies and onion soup and mix again. Then I add the beans (for fibre) and since this is a lasagne mix tomato paste to thicken the sauce and yes mix again.

After that I pour in water to cover this massive mixture. This time it was to the top of the stock pot as in just about at the brim.

Then this thing gets heated, so on the stove it went. 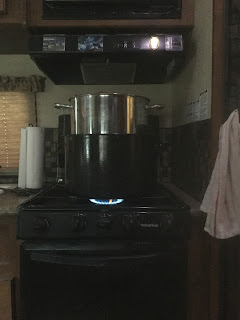 I soon realized that I needed more heat to get this thing going, so I moved it to straddle all three burners and let ‘er rip. 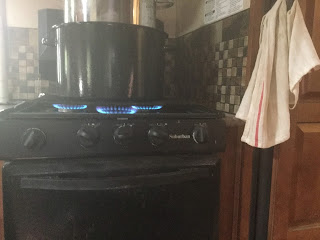 After that I let it go, it took half an hour for the water to boil and I had to keep an eye on the water level and keep adding water to it so as to surround the stock pot as much as possible with boiling water.

I wasn’t able to get the stock pot simmering or to a rolling boil, but it was essentially like a large slow cooker. So I let this go for four hours (about five hours on the stove in total.) I used a lot of propane, I usually do.

After that I let this concoction sit for one full day, as in 24 hours. This lets it cool but also allows the flavours to mix together.

After that I portion it out, I use a food scale so I can measure out and weigh each portion, for me each meal is 10 ounces, so a bit over half a pound.

I use Ziploc type sandwich bags, fill them as I weigh them, once the right amount of food is in it, I squish and squeeze the food so all the air goes out, usually working towards one corner.

It worked and I was able to use the whole batch with nothing burned on the bottom of the pot! 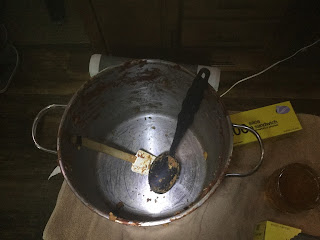 Then I stack them flat in the freezer (this is important). Make sure to leave room for swelling of the food once it freezes (trust me on that). Once they are frozen planks of food then you can stack them vertically if needed. 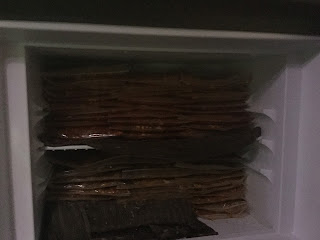 To serve just take one out of the freezer, rip the bag off (to ensure that all of the food comes out of the bag) then put it on a plate and microwave for five minutes and you are eating.

For lunches I put them in a Tupperware type container and break it in two to make it fits. It is frozen thin enough that you can do this.

There, that is how I make a lot of lunches for cheap. When I have a larger freezer available I will make a few batches of different flavours for variety. Since I only have this small freezer, I just pack it full of one batch.

As always: Keep your head up, your attitude positive and keep moving forward!
Posted by Geoff W at 07:38