Okay, like a lot of people I have been using Dropbox for a few years now. It is a great little piece of software that lets you keep your files synced to an offsite storage place that you have access to across the web.

I like having access to my documents wherever I go and know that if my computer suddenly implodes that I will have up an up to the minute backup of my key documents. Hardware, can be replaced and software can be reinstalled ; it is the documents, your data that cannot.

Since I bought my iPad I have been using the Dropbox app on it to access and tweak my budget spreadsheets on a regular basis. I will also: download, edit and upload them again when at work (before work).

I was impressed with the Dropbox app when I found out that I could use Word and Excel apps for free with Dropbox. All I had to do was select the file that I wanted to edit, tap a “pencil” icon and voila the document was opened in Word or Excel.

I could then edit to my heart’s content and then “send it back” to Dropbox, where it was updated. It was slick, handy and I was happy.  This past weekend I got this message when Excel opened . . . 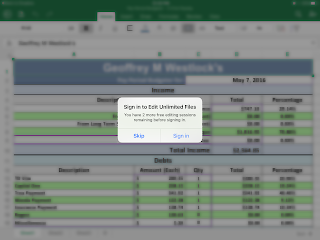 (Okay, technically it said “You have 5 edits left.”)

I realized that this meant that Microsoft expected me to pay to use their app. This was not something that I was prepared to do when I have applications that came with my iPad that will let me edit Office docs.

The next natural thing to do was just adjust the setting in the Dropbox app and tell it that I wanted another app, any other app than the Microsoft apps, to edit those documents. Guess what, you can’t, the two apps are married. 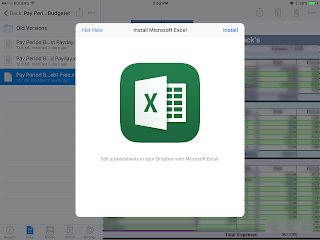 I even went to the Apple store and talked to a “Genius” and they were no help and said that the limitation was within the Dropbox app itself. So, I contacted Dropbox and complained and they gave me a response full of corporate doublespeak, but no real answers.

All along I knew that I could export the file from Dropbox to another app, edit it, then export it again and send it back. This is a clunky system and is essentially copying the file back and forth where there will be two copies of the same document, in two different apps.

After much thought I decided to just export my two spreadsheets once and for all to the Numbers app that came with my iPad and store them on my iCloud drive. 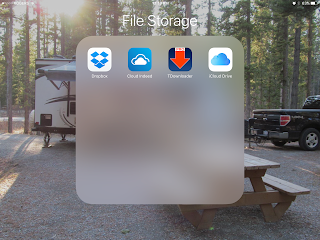 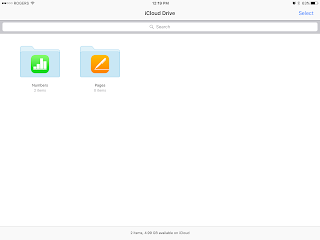 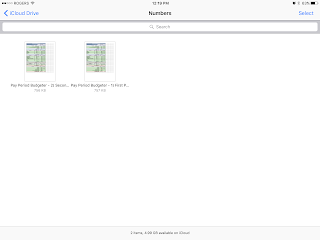 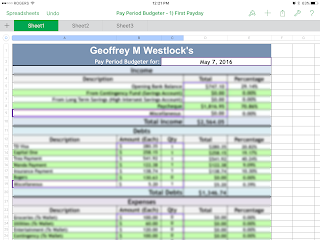 I can still login and edit them like I could with Dropbox but this time for free. I will see how I like this as I may well move away from Dropbox completely over this.

I know that if I sign up for Office 360 that I get online storage and can use their apps on my: computer, phone and iPad. I am just not ready to do that yet, as I still have Office 2007 and it works just fine (that and I don’t like renting software).

This was something irking yet interesting that I found out, so I thought that I would pass it along, hope it helps to anyone in the same situation.

As always: Keep your head up, your attitude positive and keep moving forward!
Posted by Geoff W at 07:58