Okay, so while some of you may not even have a broom in your house, a broom is a staple in my house and in my life.

Not to mention the important part that the broom plays in keeping the snow off of my solar panels.

The problem comes with the plastic end that screws into the broom (brush thing) itself.

That part has cracked a few times from the accidental dropping to a hard hit in the frigid temperatures.

I tend to buy another broom due to the cost difference of just buying the broom handle of the . . . economically priced . . . broom.

This time I decided to change things up. On Thursday my broom handle cracked again when I was up on the roof sweeping the snow off of the trailer.

I finished sweeping by just holding and handling the broom brush thing itself.

I decided to not just buy another broom only to have it break again, I went out and bought a new solid wooden broom handle. 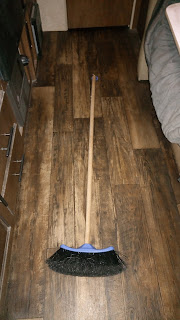 The old broom handle had a built in loop, large eyehole in order to hang the broom on a hook by the door (highly recommended in an RV). 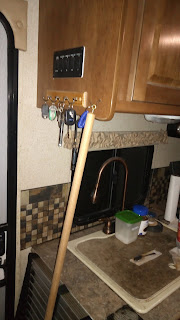 This meant that I had to improvise a bit, and I decided to add another addition. 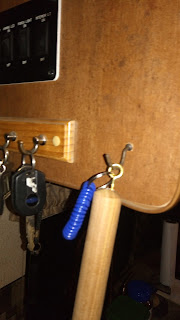 I screwed in a large eyehook into the top of the handle of the broom (as far as it would go without breaking or twisting).

I hooked onto that eyehook a wrist keychain. This is one of those coiled bracelets that you wear that has a key ring on it.

I attached the broom to the bracelet like you would a key and voila, I have a way to attach my broom to my wrist. 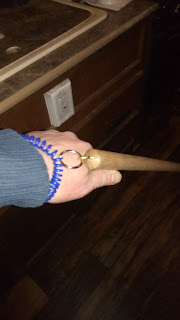 Why? Well, now I don’t have to worry about losing my broom over the side of the trailer when I am brushing my solar panels off.

It hasn’t happened but it could happen since most of this brushing is done with me holding the very end of the broom and pushing.

As always: Keep your head up, your attitude positive and keep moving forward!
Posted by Geoff W at 07:52