The Foot That Wouldn’t Step

So, wind the clock back to the weekend before last . . . (Canadian) thanksgiving weekend to be exact, more specifically 4:30 am on Tuesday morning.

I was packing up and pretty much the last thing that I do is to bring Wanda’s front foot up. You know this is what the “dolly-wheel” is on older, smaller and lighter trailers. 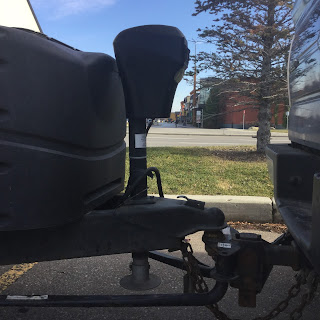 This foot is supposed to take the weight of the trailer, in cases of smaller trailers where it is possible to push it around by hand, this foot is a wheel. (Wanda is “big boned” so nobody is pushing her around by hand.)

Most of the older Dolly-Wheel or Front Foot are wound up and down by hand, not Wanda, hers is electric. Therein lied the problem.

I clicked the switch, and nothing. I tried it a few times, even in reverse and nothing. This was odd, because it worked fine going down but going up, it wouldn’t.

I didn’t have time for this so I pulled out the “just in case” manual crank and cranked that foot up by hand and off I went to work.

The week before last, I really didn’t have the energy to investigate this problem after work, so it became a Saturday project.

The first thing I thought that it could be was a fuse so I looked at my fuse box. Nope, not only was there no fuse blown, but no fuse allocated for the front foot. 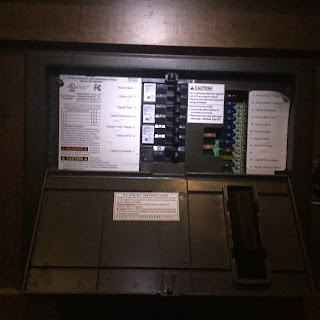 I opened up the head of that foot and tried to see if there was voltage going to it, using my trusty Multi-Meter. My first guess was a switch, nope, no voltage anywhere.

So, next I traced the wiring harness back from the front foot to see where it led, and look what I found . . . . 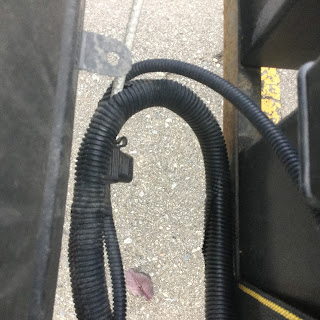 That is an inline fuse, the bane of many a mechanic. This little device is designed to put a fuse in the middle of the wiring harness, so that you have the safety of a fuse, but it could be located anywhere! 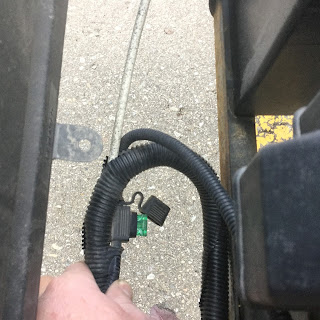 Yep, the problem was just a blown fuse. 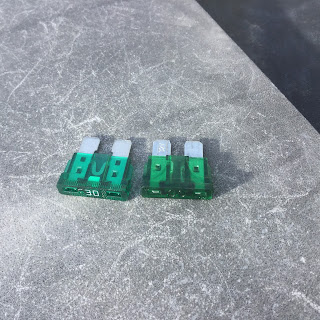 For those of you who may not know, the fuse on the right is blown and the one on the left is a good (not blown) fuse.

So, all it took was to replace the fuse and the foot worked fine. 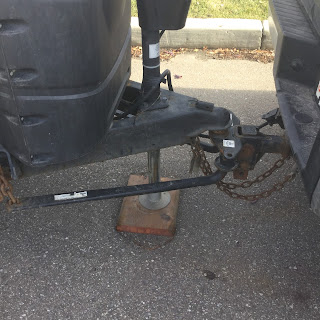 You may be wondering why anyone would put an inline fuse out here when there is a nice and central fuse box?

The answer lies in how these RV’s are made, they are build with off the shelf components in a factory.

As in the people who made Wanda bought that front foot assembly from someone who just makes those front feet.

To make it safe they put that inline fuse in their harness which is to connect up to the battery. This way it is safe just as it is, no matter what trailer you install this front foot assembly onto.

So, if you face something similar, never forget to look for that inline fuse.

As always: Keep your head up, your attitude positive, and keep moving forward!
Posted by Geoff W at 08:35